Happy five-month birthday! What a big month this has been for you. You have two teeth!! I can't believe it! After weeks of intense drooling, bright rosy cheeks, and shoving everything in your mouth, you are now the proud owner of two tiny little bottom teeth. You've been such a champ though. You're still our happy little chap. 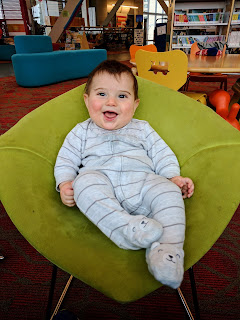 Another big milestone for this month is that you now sleep in your own room. You've been doing great with that and we're all sleeping better. You still get up a couple of times a night, but you generally fall right back asleep. Sadly, you will still only nap in the car seat, swing, or on me. You're so little (relatively, ha!) that I'm just enjoying the snuggles for now. 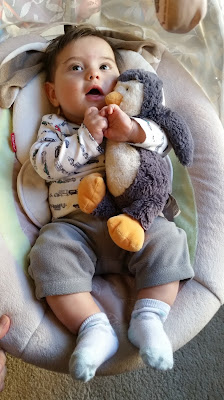 You're not rolling yet, but you're showing some signs of interest and ability. With my help you can turn to your side. Then you get the best proud look on your face. You're also starting to sit on your own a bit. It's still kind of floppy, but you're getting close. You are so strong--daddy likes to take you for a "walk." 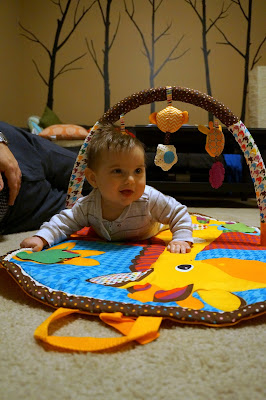 You are ticklish (especially under your arms) and love laughing. You smile at everyone you see, but save your biggest smiles for daddy and Zahara. You really love when we have bath time with Z. You are just the happiest baby and we couldn't be happier with you. Happy 5 months! 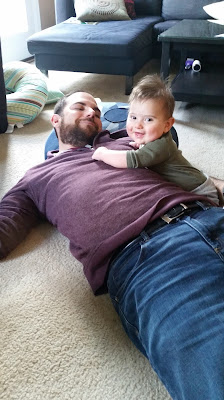 Read about Zahara at this age:
Dear Zahara: 5 Months
Posted by Calli at 9:00 AM No comments:

It's been a while since I've updated the blog, but that doesn't mean we've just been sitting at home. Here's a look at some of the fun things we've been up to these past couple of months:

Thanksgiving in Florida
We spent Thanksgiving with my in-laws in sunny Florida. It had all the makings of a great holiday, except for the fact that both Zahara and Asher were sick. Z had 102.6 fever on the day we flew there, and Asher had a terrible barking cough that forced us to keep him sleeping upright. After a few days with Z's fever going strong, we took both kids to urgent care. Asher just had a nasty cold, but Zahara had a double ear infection. Poor girl. Thankfully we were able to get her on some antibiotics and she felt better in time for our flight back. 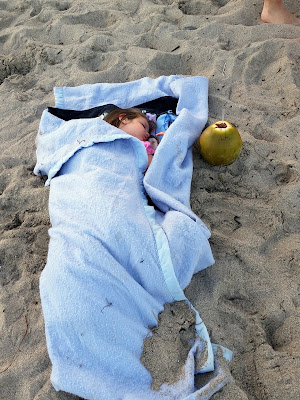 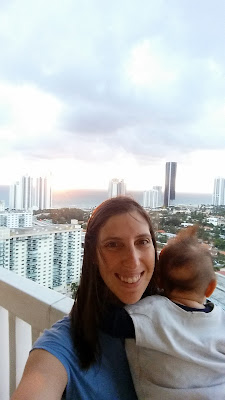 I have to say though, both kids were troopers even while they were sick. We went to the beach one day and to Jungle Island another day. I've never been to Jungle Island before, but it was much better than I expected. There were tons of animals and you could interact with a lot of them. We really liked all the monkeys, apes, and kangaroos. 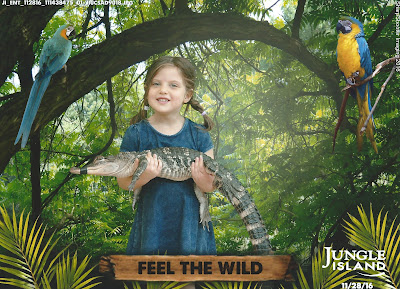 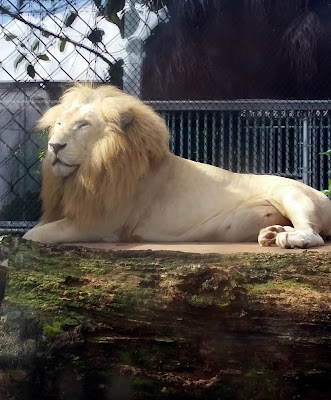 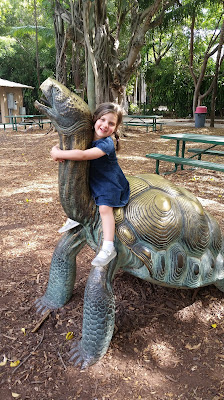 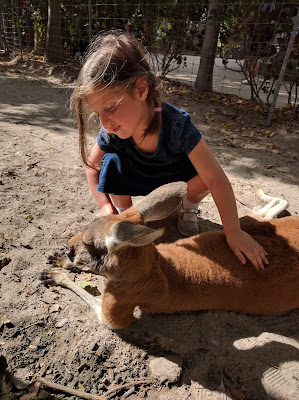 Zahara's First Ballet Recital
Zahara has been taking ballet classes this semester at school and a couple of weeks ago she had her first recital. It was amazing and everything you'd expect from a bunch of three- and four-year olds. They all looked adorable. One kid was sitting on the floor during the performance, one kid shouted that she had to go potty, and Zahara's head was in the clouds. It was great. You can watch the video here. 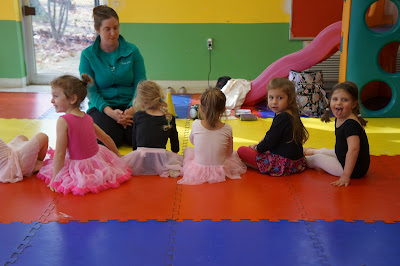 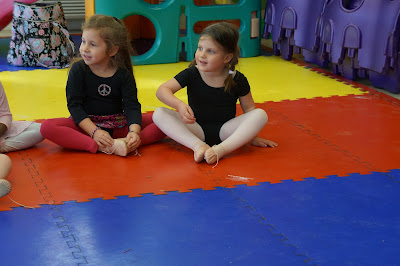 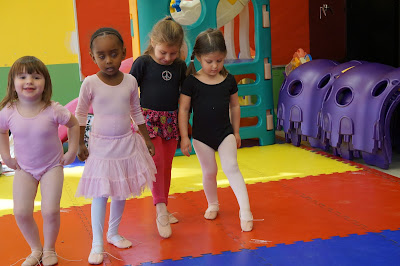 Zahara's Chanukah Recital
One of the things I love most about Z's new school is how she comes home singing songs in Hebrew and teaching us new words. Last week the school put on a chanukah play. Each class sang a song and performed a dance. I loved watching the proud parents filming their kids almost as much as I loved watching the kids themselves. Here's the video. 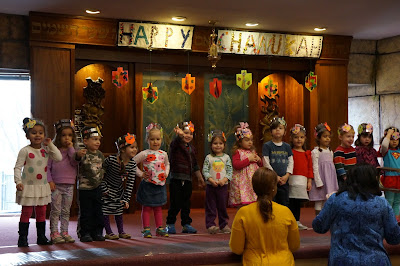 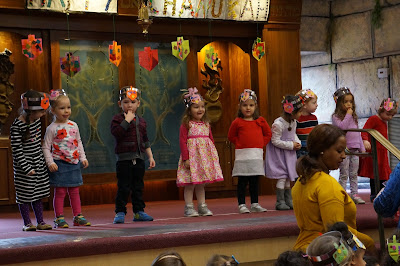 Visit with Friends
We had a full house last weekend! Our friends Kyle and Sarah came to visit with their two kids. It is so fun because they have a daughter who is only a couple of weeks younger than Zahara, and a son who is a few weeks older than Asher.

Sarah and Kyle live in New York now, but we first met in England. We traveled the world together (see here and here), and now there's a new generation of buddies. Zahara and Pearl got along a lot better than the last time they saw each other. They LOVED having a sleepover and were hilarious as they were jumping and giggling all hours of the night. 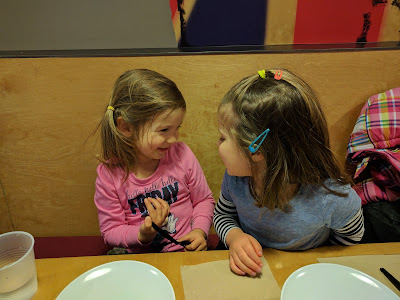 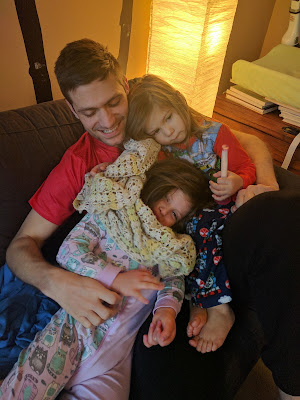 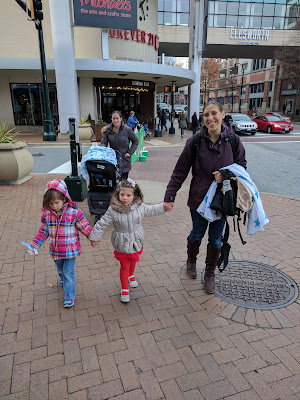 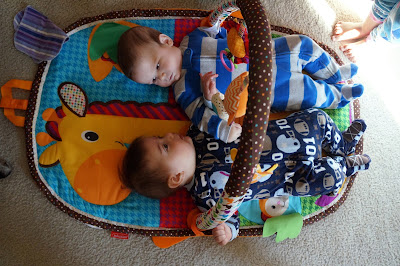 Trans Siberian Orchestra Concert
Dan and I went to an awesome concert the other night! I have always loved their music and it was incredible to see them at the Verizon Center. Our seats could not be further from the stage--serious nosebleeds!--but the show was designed to be seen from any angle and distance. Their stage presence was intense and the fireworks and lasers were incredible. If you ever get the opportunity to see them, grab your chance! 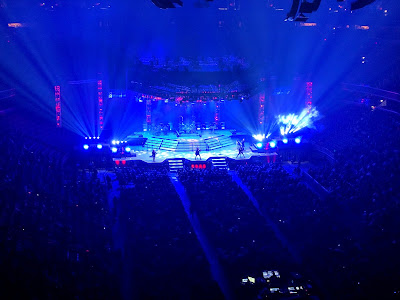 Email ThisBlogThis!Share to TwitterShare to FacebookShare to Pinterest
Labels: Family, Things I Love 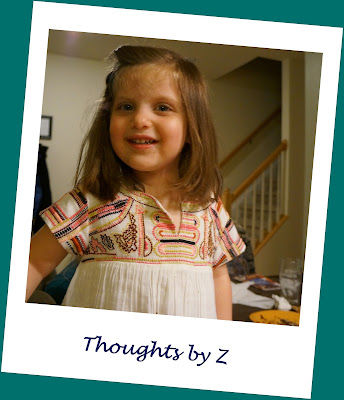 More from the mouth of babes:

Thought 1:
Z: I'm going to make this delicious, like a salad!


Thought 2:
Z: Mummy, you can have this sticker because it is huge and you are huge.

Thought 3:
Seeing Dan's mouth guard in the bathroom:
Z: When I'm big, are my teeth going to be in a jar?

And an extra thought from me, about Zahara:

See previous Thoughts by Z here
Posted by Calli at 8:58 AM No comments: